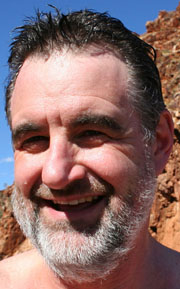 Antony was born in Adelaide in 1959. In 1966 his family moved to Alice Springs as his father, an architect, had set up a practice after designing the local Catholic Church. This practice, Andrew McPhee & Associates, was the only one in Alice Springs for many years, closing in 1985 when his father retired.
The eldest of four boys, Antony was raised with architecture around him. From an early age his father took him on site visits. In Alice Springs this sometimes meant driving hundreds of kilometres over dirt roads, or flying in and landing on the nearest flat ground.
He attended school in Alice Springs, finishing his secondary education at Scotch College in Adelaide. Following university he worked for an Adelaide Architect for a year, then late 1984 moved to Melbourne.
In 1986 Antony registered as an architect in Victoria.
He has been an associate member of Royal Australian Institute of Architects (RAIA) since 1986 and been on various committees and taskforces. In 2012 he was elevated to Fellow of the Royal Australian Institute of Architects.
Antony has worked at a number of well known Melbourne firms, including Daryl Jackson, Peter Elliot, Edgard Pirrotta, John Wardle, Lyons Architects and Ashton Raggatt McDougall, where he was a Principal.